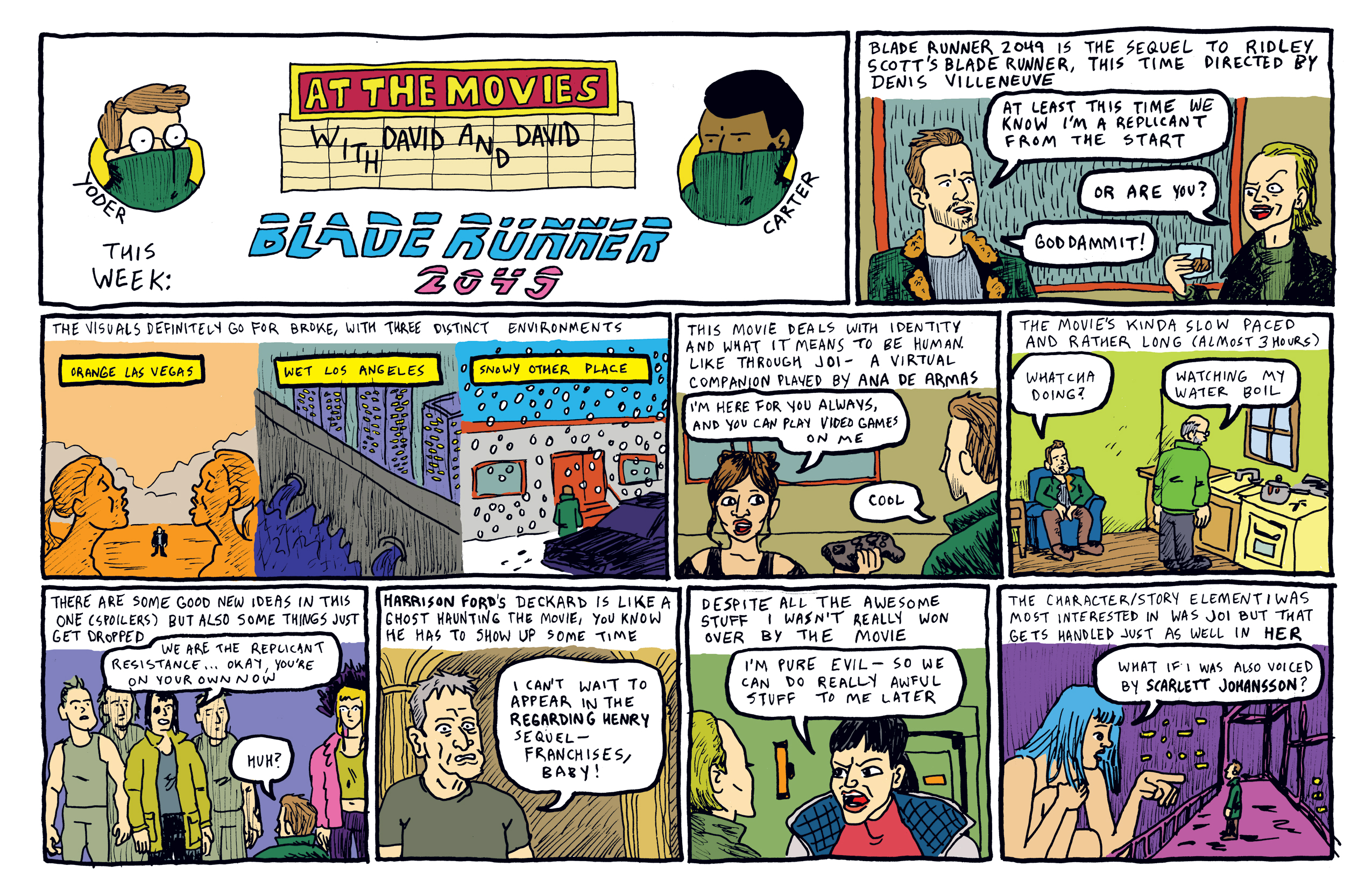 Disclaimer: This is, unfortunately, one of those times that the angle at which I’m tackling a film is only worthwhile if I just flat out spoil the film from top to bottom. But for those just wanting to know my feelings: it’s a great film and one that took an entire week of contemplating to grow. It’s not an easy watch, but I think a rewarding one. It’s movie that wants to have a dialogue with the subtext of Blade Runner but morph it into text, while taking its own even more complicated journey. Please see this film.

As I mentioned in my Blade Runner review last week, the movie’s legacy is so entrenched in its groundbreaking aesthetics, and production design and slightly less in its characters. However, some of those characters have also gone on to influence so much of the film landscape over the course of 30 years. While I talked about Rick Deckard and his deeper complexities in that write up, I only briefly mentioned the true protagonist of Blade Runner, Roy Batty. He’s the Byronic Hero of the story. A character who rebels against the very concept of death even with its inevitability. He’s romantic, charismatic and arrogant. As Tyrell, his maker and god, tells him “The light that burns twice as bright burns half as long and you have burned so very very brightly.” Roy Batty is the living and breathing embodiment of the Dylan Thomas poem “Do not go gentle into that good night.” Roy rages against the dying of the light like nobody’s business.

And while that light did burn half as long, it burned an impression on the landscape that all future replicants were able to follow. Blade Runner 2049 has replicants all taking pages from Roy Batty’s playbook, but now their lifespans are no longer artificially shortened. This complicates things and is what the larger narrative tension is about in Blade Runner 2049. An angry and dissatisfied group of people coming together in greater numbers and organization to escape the societal bondage they’re kept in, with a few twists to that narrative thrown in. This, however, is just the text of the film. What was once underlying in Blade Runner is now outright and writ large in Blade Runner 2049. The subtext of the film plays with the journey of a new character. One that’s an amalgam of Rick Deckard’s introspective, self-discovering private eye and Roy Batty’s destiny denying replicant, but someone that’s also dealing with his own issues. Issues that take on a decidedly female form.

Blade Runner 2049’s lead character is a replicant lawman named KD6-3:7 (Ryan Gosling who continues to be one of our most reliable and interesting actors) or simply “K.” Even though he’s more officially on the LAPD’s payroll than Deckard was, he’s still playing the role of a private eye in the form of Blade Runner. Right off the bat things are different with K. He’s quiet but not in a brooding way (at least not outwardly) but more mild-mannered and reserved. The film opens with him going to a protein farm to retire a fellow replicant Sapper Morton (a tinily bespectacled Dave Bautista). K sits patiently waiting for Sapper to come home while a dutch oven full of simmering soup spits and spatters across from him. Sapper arrives knowing what the deal is. He knows he’s not long for this world even if he fights back, so he sows a thought into K’s mind. One about miracles. K’s steely reserve is shattered at the discovery of this new mystery. While a great callback to the opening scene of screenwriters Hampton Fancher’s unused draft of the original Blade Runner, it’s an efficient and subtle way to flesh out K’s character. Underneath the calm demeanor lies a sea of swirling questions and anxieties. It feels like only a matter of time before he’s no longer able to pass his baseline test (a seemingly more intense and efficient Voight-Kampff stand in to see if replicants are mentally stable). You think K’s journey through the film from here will be reckoning with his replicant heritage and the morality of making his livelihood hunting down his brothers and sisters, but it goes so much deep than that. The impetus is when K comes to realize that the larger conspiracy at play is that a child has been born of a replicant (specifically Rachael from the first film. K finds Rachael’s remains buried under a tree on Sapper’s farm) and that he may be that child.

So K goes on a Raymond Chandler-esque journey to separate fact from fiction, all the while dealing with the implication that he may be this Christ-like figure to lead the replicants to the land of milk and honey. However, after the end of the 2nd act of the film, K has a rude awakening: he’s not the child. The child is a woman named Dr. Ana Stelline. A fabricated memory maker with an immune system deficiency, so she works in a glass cage. She puts herself in her work leading K to share memories with her. This revelation of a woman both being the chosen one and the shaper of his memories and life experience is no accident. You see, K’s entire world is seemingly motivated and driven by his female anxieties. You can see it in the power dynamics with all the women he interacts with within the film. K’s boss Joshi (played incredibly by Robin Wright) is the one barking orders at him, and treats him closer to a little boy told to go do his chores and clean up afterward than a detective and killer. K has a relationship with an artificial intelligence named Joi (a wonderful and gentle performance from Ana de Armas) who seems to love K and only wants to be as close to him as possible. Which is exactly why K’s own affection for her is slightly stilted since he’s never quite sure if she feels this way about him or if it’s an algorithm at work fulfilling all his desires. K’s physical antagonist is Luv (played with ice-cold menace by Sylvia Hoeks) who is superior to K in nearly every way, even declaring herself the best replicant ever made at one point. If K is a droopy-eyed bloodhound on a trail for the truth, then Luv is a wolf ready to tear that bloodhounds throat clean out. Replicant prostitute and revolutionary Mariette (Mackenzie Davis, whose screen presence can’t be contained to four corners) pities K, even chastising him for having a virtual girlfriend when he turns down her strategic advances (“Oh, you don’t like real girls” she provokes) but she also sees a potential for change and good.

Even the set dressing of this world is littered with images of male anxieties. There were two visuals in particular that stuck out to me, one being women in cages. Whether it be shots of dancers/prostitutes in cages on display in downtown L.A., Joi being limited to the confines of K’s apartment and then a hologram projecting pen, or Ana Stelline trapped behind glass in a small room doing incredible work (not knowing that she herself is special). It’s a clear illustration of how we treat women now, but amplified and literalized for the future. The other even more striking image is all of the giant women presented throughout. There’s the already striking image of the giant naked Joi advertisement pointing and talking down to K. There are the gates to the Vegas-like city depicting two women, mouths agape for oral pleasure facing each other. Not to mention the half-destroyed statues of women in vulnerable positions wearing heels. There’s even something as seemingly innocent as ballerinas dancing around the city. It all feels very Freudian and Fellini-esque, especially when you consider that K’s entire arch is not one of connecting with his potential father, Rick Deckard, but learning more about his potential mother whose body he discovers. K is a lost child in this movie looking for maternal figures to guide and nurture him. The movie is so explicit about K’s Oedipal nature that Joi gives him the human name “Joe” when he thinks he truly is the child born of a replicant. She does this after saying a mother would want her child to have a real name. Joi is the nurturing presence for K, but also a sensual and sexual one. It’s complicated.

The guidance helps in his journey to become a real boy (there’s a Pinocchio thread in this film as well. Joi is pretty much K’s Jiminy Cricket) but it doesn’t solidify it. K only takes control of his fate when he relinquishes his ego and the idea of him being the savior and instead decides to help with the replicant cause. In Blade Runner 2049, you can read the replicants as so many disenfranchised folks, but with the heavy female cast and imagery, it’s so solidly about women’s current struggle to take control of their lives and bodies. I haven’t even touched on the villain of the film, capitalist and industrialist Niander Wallace (played to aplomb by the insufferable Jared Leto precisely because he fits the character so well), another visionary without vision (Wallace is literally blind and Tyrell wore thick glasses) and the Satan to Tyrell’s misguided God figure. Our introduction to him is watching a naked female replicant be born, all the while monologuing about the implications of replicant procreation. He rubs her stomach while remarking on it’s “barren pastures” and “salted earth” only for the scene to climax with the slicing of her womb and her disposal. It’s not very subtle, to say the least.

While I only briefly touched on Gosling’s performance in this film, there’s a reason he was chosen for this part. What made him such a compelling actor in the early 2010’s was his ability to be simultaneously charming and boyish while also having a stunted emotional capacity. His roles in  Nicolas Winding Refn collaborations make that the defining point of his characters, especially in Only God Forgives (which is also very Oedipal and about masculine vs. female anxieties). He’s the perfect conduit for a movie like this to be snuck into theaters. He’s so handsome and likable that you almost miss that it’s a 3 hour, 150 million dollar cyberpunk film about a lonely boy who has a cyber waifu and must contend with the fact that women, more important and talented than him, are a large part of the world and he must make the choice to be an ally or go back to ignoring the problem. Truly a film for our times.