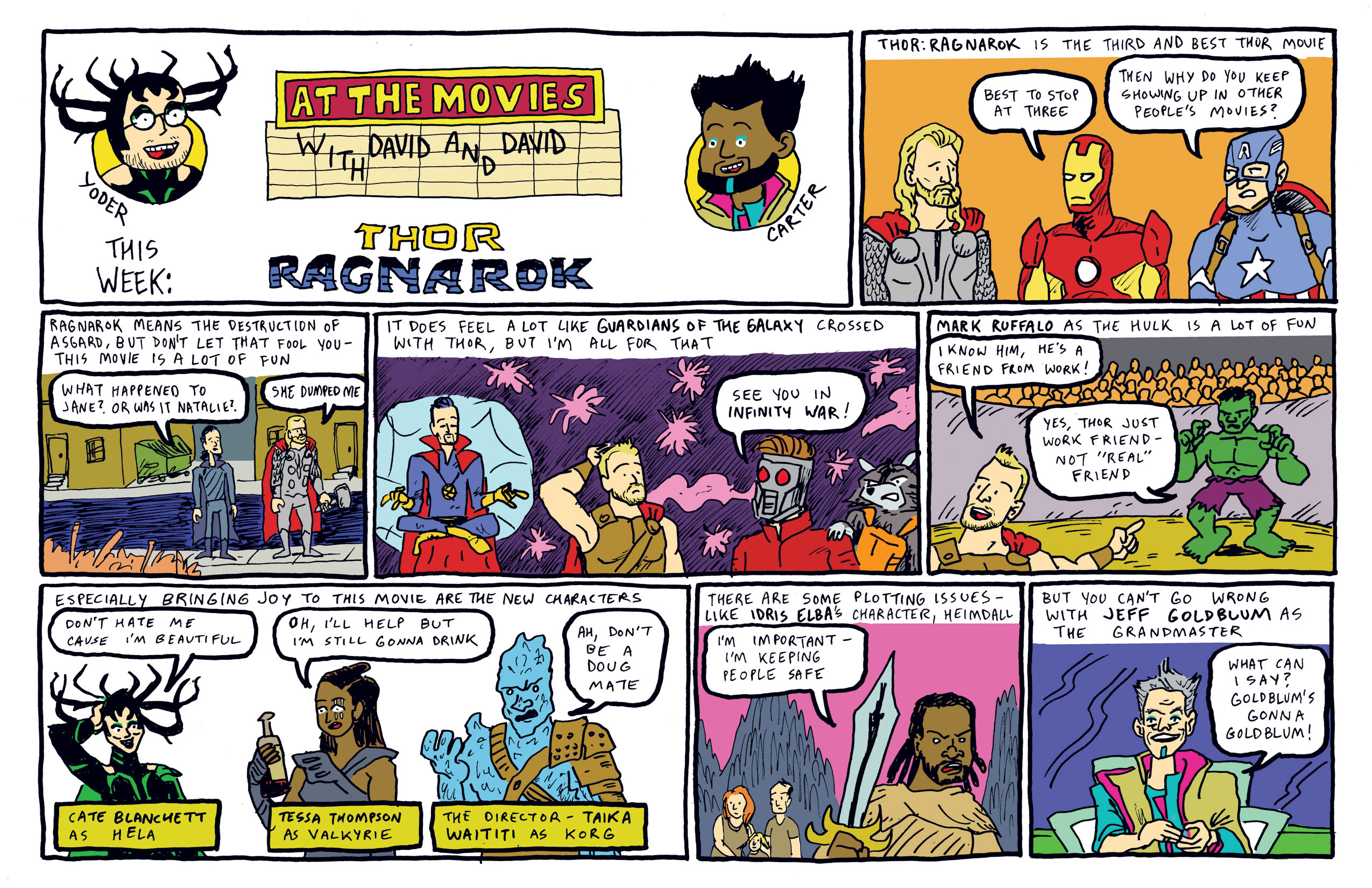 Here’s some transparency. These write-ups generally come out a week after whatever movie Yoder and I are talking about. Why? Because both of us are very busy and it takes more than a day to conceive, write, draw and color a multi-panel comic at a level Yoder feels comfortable putting out. I technically have the much easier end of the deal. I can generally write these in a couple of hours if I put my phone away and have a decent cup of coffee. What that extra week allows me to do is sit and think about as many angles on a film as I can possibly muster. I do this because I try and not just make these typical by-the-book reviews where I just summarize the movie up to a point and talk about things I did and did not like. While that’s present I’d like to think I go a little deeper than an average blog review.

The downside to this process is that I tend to avoid reading reviews, think pieces, and essays (however, I do read interviews with cast and crew) on a particular film until I’ve finished putting my own thoughts down on paper. This is so I can maintain what I consider is generally my point on a movie without chompin’ anyone’s flavor and to maybe come up with something no one is talking about. Unfortunately, in the age of social media, this isn’t really a foolproof system. I constantly glance at succinct takes and to the point headline titles that give me a general idea as to what that conversation is surrounding a particular film.

And folks, just about every angle and take I came up with for Thor: Ragnarok has been discussed at length by people smarter and more qualified than I. So much to the point that I decided to start reading these articles before I fleshed my own thoughts out on paper. There’s the discussion that Thor: Ragnarok is one of the most (ahem) low-key queer blockbusters made in recent superhero film history with coded imagery, an alluded bi-sexuality of a main character, and a color pallet and costumes that’s a little more multi-colored and bright than we are used to in our overtly heterosexual power fantasies. There’s the discussion of Mark Mothersbaugh’s moody and fantastical synth-infused score pulling Marvel out of its rut of producing uninspired placeholder-y sonic distractions of their other films. There’s the talk about where this sits as an auteurist entry with the incredible Taika Waititi’s flawless filmography, or how so much of the crew and parts of the cast are made up of the indigenous Māori of New Zealand as well as other peoples of color. Furthermore how that diversity and point of view in front of and behind the camera has led to Marvel producing a movie about the ugly realities and consequences of Anglo colonialism.

When all these takes started coming to me and reading them fleshed out in ways that gelled with my own reads of the film as well as deepening them and challenging them, something finally hit me about these Marvel films. They are still a product, made by one of the most powerful and dubious companies on the planet, but I don’t think it’s fair to say any longer that these products are cookie cutter and massed produced. Honestly, they haven’t been for a while.

Thor: Ragnarok is the third Thor movie but fifth movie featuring the character Thor (as always played comfortably by Chris Hemsworth), which is important because for all the non-character growth people accuse these movies of (which I find intellectually dishonest sometimes), Thor’s journey arc has been supported in all of these films, albeit with varying degrees of success and focus. Thor’s arc has simply been one about family, humility, and growing up (which sounds similar to Tony Stark’s arc but that was only within the first couple of Iron Man films) so that he can prove himself worthy of the throne of Asgard eventually. Thor: Ragnarok sees what is the culmination of that arc. Set 2 years after the events of Avengers: Age of Ultron the movie picks up with Thor coming to the end of his unseen quest to stop the event Ragnarok from happening (much like the entire franchise, Ragnarok is only loosely based off of the actual Norse mythology. Think “Asgardian Revelations”). He does battle with the demon Surtur set to the only band and song that can truly capture the dweeby fantasy elements of the Thor franchise properly, Led Zeppelin’s “Immigrant Song.” From here the movie has to wrap of various threads from Thor: The Dark World, such as resolving Loki’s false reign of Asgard, Odin’s imprisonment, and the departure of Natalie Portman’s Jane Foster from the series. They are all perfunctory actions leading up to the main event, a complete upheaval of everything we’ve come to expect from these movies. The Shakespearean platitudes Kenneth Branagh built in the first movie are torn down and undercut at every turn. The villains are not only played by some of the most interesting and recognizable and veteran actors working today (Queen Cate Blanchett and Jeff Goldblum just Jeff Goldblumin’ it up) but interesting people and beings with depth and quirks, a departure from the forgettable Dark Elves of Thor: The Dark World and the not at the time iconic Loki of the first film. Every human sidekick and old friend is replaced with interesting alien warriors with compelling backstories. Like indie film star (and one of the best young actresses working today) Tessa Thompson’s Valkyrie, or a full-on fleshing out of Thor’s relationship with The Hulk and Bruce Banner (both played by Mark Ruffalo). The humor replaces the well-worn fish out of water jokes for Thor not understanding Earth or human culture with well … actual bits. The humor in the movie, largely thanks to Waititi, ranges from delightfully immature world play to bits clearly riffed on the set the day of the shoot, to great visual gags that took some thought. The characters don’t feel like they’re reciting jokes, it feels natural to who they are.

I could go on, but the whole reason I bring all of these elements up is that Thor: Ragnarok is so far away from the days when people would complain that all of the Marvel films were amorphous grey slop made to taste like real movies. I briefly mentioned these criticisms in my Guardians of the Galaxy Vol. 2 review and how I feel like they’re slightly unfounded. After Thor: Ragnarok I’m ready to say that Marvel has been making huge leaps in the right direction since Doctor Strange (You could argue for Iron Man 3 but that movie was an anomaly at the time). They’ve consistently brought in directors who have had skewed angles and interesting mix-ups to movies that largely still have to exist in a somewhat coherent universe. The talent has diversified and grown in stature (Most of Phase 1 is made up of mid-level and up and coming actors or Robert Downey Jr. in his redemption phase) in front of the camera as well as behind. Most importantly these movies have stories and tones that speak to so many people in so many different ways now. The shortlist of thematic and production elements I attributed to Thor: Ragnarok wouldn’t have been present in these films back in the late 00’s and early 10’s, but in 2017 alone we’ve had an action adventure sci-fi bottle story about familial abuse and human ego, a John Hughes infused parable about coming to terms with your limits, and a queer prog-rock album cover movie about the dangers of colonialism made by one of the funniest and most thoughtful auteur directors of color today. Outside of gripes about how the lighting and color grading of these films could still use some work, the Marvel movies have grown up into real movies and looking at Black Panther ahead, it seems like those steps are becoming leaps.