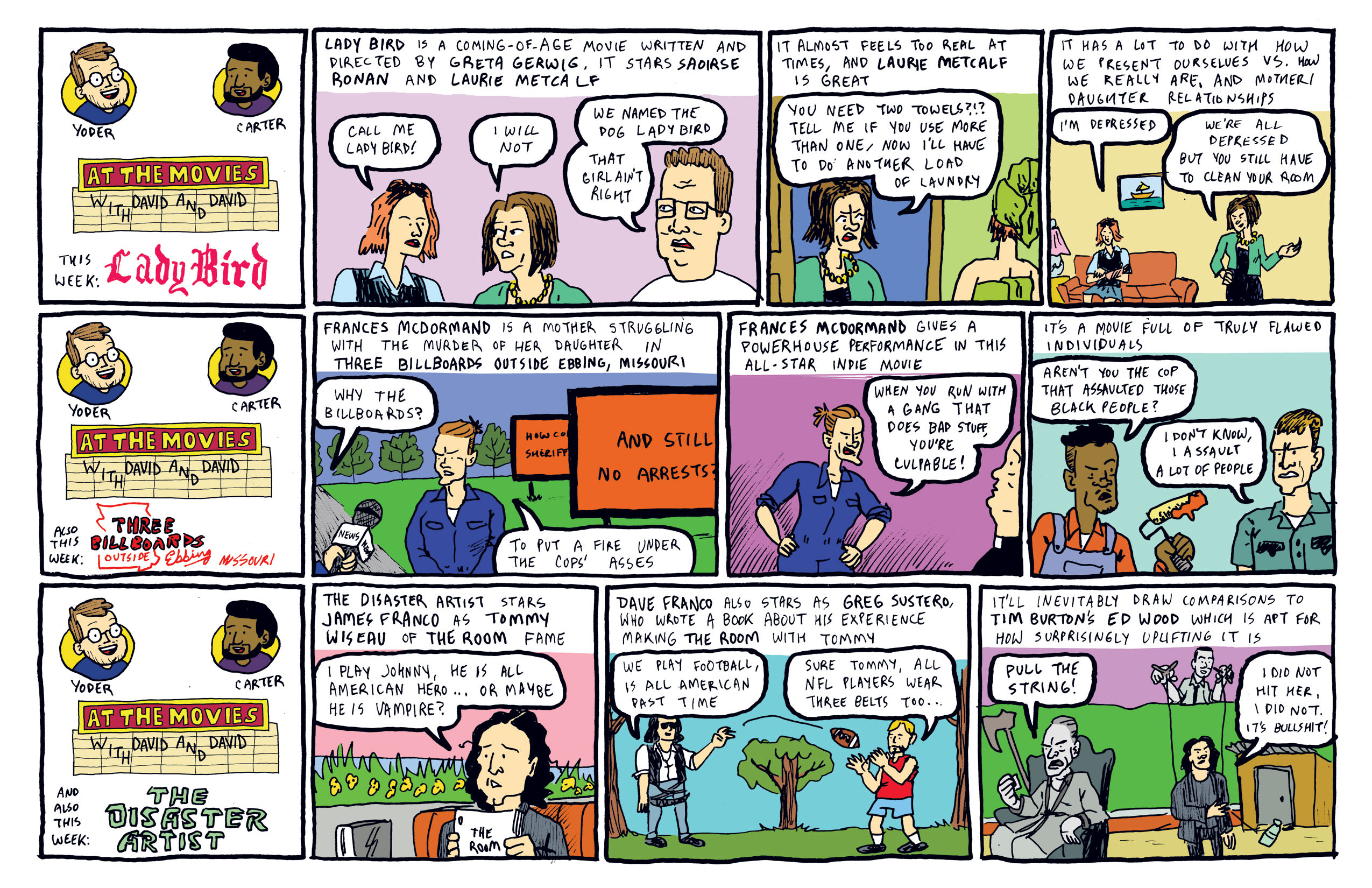 As the year rolls to a close one of the few pleasures that greets the movie-going audience is a deluge of great movies aimed at adults all clamoring for the awards gold that awaits them early next year. These movies aren’t all perfect, they just tend to swing for the fences in a way that the mainstream movies don’t typically do (swing big, miss big), although in a year where we got Blade Runner 2049, Alien: Covenant, and  mother! during the blockbuster season, this particular wisdom may be coming moot. Inversely we also get good old-fashioned Oscar bait, that can be fun in the moment but ultimately forgettable (when was the last time you thought about Argo or The Artist?). While what’s considered awards-worthy is rapidly evolving (for the better) with the introduction of new and excitingly diverse voices in every aspect of film culture (direction, writing, production, criticism, reporting) the 2018 awards season looks to be a huge toss up. That’s exciting for a medium that tends to do better when it’s pushing and expanding its worldview.

But for all their aesthetic, budgetary and POV differences these films still share the human element. Humans, no matter what their background tend to share some universal experiences and therefore some universal themes. There’s one theme, in particular, that’s been daisy chaining seemingly dissimilar movies together in my mind for the past few weeks. One that speaks to anyone who’s been caught up with their own ego or passion and hasn’t taken a minute to step back and figure out how it affects themselves and those around them. Especially family and surrogate families. The narcissist is a tried and true archetype and a popular one at that. Why wouldn’t it be? All of us want something to aspire to and the narcissist is aspirational in a way. They’re a hero unto themselves. They’re smart or beautiful but use that power to benefit themselves first and the world second. They’re right of center of a hero and left of center of an anti-hero. They’re never really bad enough to be a villain but they do villainous things. Most importantly they leave a mark on the world and those around them.

But in 2017 we tend to view characters like these through a different lens. As the lines for good taste and standards of consciousness change and expand so do our flawed heroes. Sympathy, empathy, and growth are key ingredients to make characters like these not come off as repulsive. In 2017 three awards contenders inadvertently cover this ground in some pretty welcome and unique ways.

Greta Gerwig’s solo directorial debut Lady Bird is the latest in what has become an annual presentation of female coming of age tales (Diary of Teenage Girl, Edge of Seventeen and Girlhood are all wonderful movies from the past 3 years you should check out). Christine “Lady Bird” McPherson (a potential career-defining performance from Saoirse Ronan) confidently states that she gave her moniker to herself and wears it proudly. She’s an audacious teenager looking to take the world by storm, while at the same time trying to figure out what exactly she wants out of it. Like most teenagers she’s selfish, and hasn’t really developed the skills necessary for impulse control, which rubs up against her mother Marion’s (Laurie Metcalf in a heartbreaking performance) own closed-off worldview. Lady Bird doesn’t do anything more drastic than any latchkey kid who grew up in the early to mid 00’s but the things she does do is to get attention. The attention of the cute boy in her theater group, the attention of the popular girl in class, and the attention of a mother that doesn’t really seem to love her so much as tolerate her. She spends so much time grabbing for attention that she never sees past her actions. She can only see herself as the lead in her own story. So yes, she’s a teenager. Little does she know that her family, friends, and teachers can see that once she looks forward she’ll do wonderful things.

It’s odd to say that James Franco’s The Disaster Artist covers the same ground in a very different way, but it’s true. The Ed Wood-esque tale of the making of cult favorite and cultural oddity The Room, is less about the process of making the world’s (debatably) best “so bad it’s good” movie (although holy shit is it about that as well) but more about the strange friendship of Tommy Wiseau (as someone who saw Tommy Wiseau in person, I can report that Franco is almost identical in speech patterns and mannerisms) and Greg Sestero (ditto for Dave Franco). Tommy is just as juvenile as Lady Bird, hell maybe more so, but his narcissism comes from a place of tragedy. He’s a lonely man who wants to make incredible art, but all of his instincts aren’t so much bad as they are extra-terrestrial.  He doesn’t know how to behave like what we as a society would consider a “normal person,” and has little interest in doing so. When he meets Greg and they do a reading of a play at a diner, Tommy urges Greg to come out of his shell and ignore what all the people around them think as they read the dialogue with the grace of a bus trying to Tokyo drift around a corner during 5 o’clock traffic. However, it’s good advice and gets Greg out of his shell and into a relationship with this bizarre man who’s mysteriously wealthy, claims to be in his 20’s when he’s clearly pushing 40 and speaks with an unpinnable eastern European accent but says he’s from New Orleans. I pointed out the Ed Wood comparison earlier but the relationship Tommy has to Greg isn’t the same as Bela Lugosi and Ed Wood’s because Tommy is pretty much Bela and Ed wrapped up in the same person. Tommy is delusional, steadfast, and stubborn to a fault and Greg is there to help him keep his dream on track and be an occasional voice of reason and healing when Tommy goes too far even by his standards. You root for Tommy right up to the point he starts verbally abusing Juliette Danielle, the woman who plays Lisa in The Room. His narcissism is no longer charming, it’s toxic in a way that no longer excuses Tommy’s eccentricities, but puts them in context. He’s not a monster, but he’s an asshole looking for a purpose.

Which is exactly what you could say about Sam Rockwell’s Jason Dixon character in Three Billboards Outside of Ebbing Missouri. A movie which is filled with narcissists all trying to sort through the complicated mess of a jarring tragedy.  Frances “give me my goddamn Oscar now” McDormand plays Mildred Hayes, a sharp-tongued matriarch who wants nothing but to find the man who raped and murdered her daughter. She does so by putting up three billboards on a little-used road outside of Ebbing Missouri posing the question to Sheriff Willoughby (Woody Harrelson in what is his third knockout role in 2017) as to why there haven’t been any arrest.  She has extreme but relatable beliefs (every man over the age of 8 should be registered to a database and when they commit a crime they should be killed) and she won’t take shit off anyone (she kicks two children in the crotch when she suspects one of them of throwing something at her car). She’s smart, she’s quick and she’s capable. She is the polar opposite of Jason Dixon, who is by all accounts and actions a certified moron. Jason is a policeman and a surrogate son to Sheriff Willoughby even though Jason lives with and has an odd relationship with his tough as nails mother. He has a murky past that includes torturing a black man under interrogation. One of the movies many themes is the meditation on a simple phrase “people are more than the worst thing they have ever done in their lives.” Jason does some dubious and downright unethical things throughout the film because to him he is doing the right thing for everybody. He’s the ugliest side of narcism. The side that has all the flaws of the quick-witted, Sorkin-esque heroes we love sans any of that wit. We also see him do things that are good and right, as well as things that stand in a grey area. In other words, he’s a complex human being who can’t be so quickly sorted as good or bad. Like Tommy or Lady Bird, he’s an asshole in a lot of ways and you don’t have to like him or even think those selfless acts outweigh the bad he’s done. It just wants you to know that for all the righteous anger aimed at people, in some cases there’s more there than just the shitty thing they said or did in a moment. It’s no mistake that the movie ends on a moment shared between Mildred and Jason, two character who have done and said morally and legally dubious things throughout the film as they face down the barrel of something that’s so grey that any narcissism to be had is washed away with a conscious awakening moral quandary that leaves them silent. In 2017, that’s the type of wringer we like to see our narcissists put through.

One thought on “Lady Bird, The Disaster Artist, and Three Billboards Outside Ebbing, Missouri”